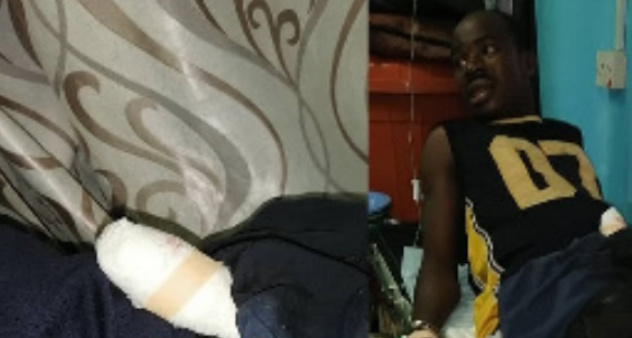 Picture of a bitten penis

Woman bites man’s penis in Obuasi during an alleged robbery attack. This took place at Abompey New Site in the Obuasi Municipality of the Ashanti Region.

A picture of a bitten penis

Justina Donkor, a 24-year-old student, reported to the Police that Emmanuel Ankron, 23 years, had drugged her and forcibly had sex with her in her room.

Justina Donkor claimed that she woke up to find the man holding a machete and pointing a locally manufactured pistol at her.

She alleged that Mr Ankron had robbed her of an amount of ¢550, her TV set and mobile phone which were in her possession.

Justina Donkor claimed her assailant later changed his mind to leave the room with his booty and asked his victim to play with his private part.

She obliged and started and in the process, she bit off his penis. The suspect also allegedly bit her at the back because of the pain he was experiencing.

She claimed the suspect ran away leaving the TV set and her mobile phone behind after se bit him and blood was oozing out.

The police have retrieved the cut off penis and have deposited it at the hospital for preservation.

The police claim investigations are still ongoing to ascertain the facts.

Nurses To Sign Agreement Today, Tuesday 03: No Strike For 2yrs