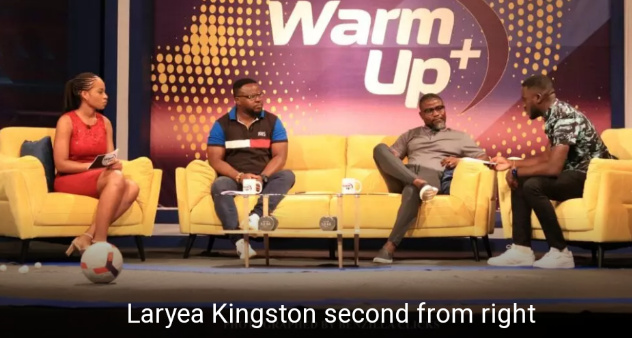 A picture of Laryea Kingston

Former Ghana midfielder, Laryea Kingston, is proud of the steady progress of his son, Jacob, and has tipped him to reach the highest level.
Jacob Kingston is yet to make his debut for Great Olympics and could feature when they host Inter Allies at the Accra sports stadium on Saturday.

The young forward joined the club in the second transfer window alongside Stephen Appiah’s son, Rodney. They were both signed from Kingstep FC – a lower-tier club founded by Kingston and Appiah.
Speaking on WarmUp Plus on TV3, Saturday, Laryea expressed his delight at seeing Jacob starting his career where he started.
Laryea who made 41 appearances for the Black Stars made his professional debut at Great Olympics.

“I am very very excited to see my boy, Jacob Kingston [part of the Great Olympics]. Hopefully, he will have his debut today. He signed with the team middle of the season but he has not had the opportunity to be in camp. Yesterday he was part of the squad that will play against Inter Allies today. So I’m looking forward to seeing him have his debut, I can’t wait. It is always important to see your son starting from where you started,” Laryea said.
Currently a coach and nurturing talents at the famous Right to Dream Academy, the former Black Stars number 7 knows his son too well and said they have completely different playing styles.

“I don’t think [my son and I have the same playing style]. His style is more powerful than mine. Mine is more smart but with him is more positive. He always wants to go behind defenders, take players on and making runs in behind. Unlike his father, that is smart, trying to come in the middle, go on the ball and try to give positive passes.
“I took my time to make him develop first before exposing him. When I was in Scotland, he was playing in our youth. I moved him to Ghana and most of my friends were saying why didn’t I leave him there. I believe it is always important to come and start at home because of the aggression and everything can help him.”

“I want him to be ready before exposing him [to European football]. I think the time is very right for him to be part of the [Ghana] Premier League and have that experience.”

It is common to see former players manage their children who have ventured into football. However, Laryea has a contradicting view.

“Even though I am his father I am not the one in his football life because it is very difficult to manage your own son. So I gave him the opportunity to get a manager who is called Mr Eric Quarshie. He is the one that took him to Accra Great Olympics,” Laryea added.

The former Hearts of Midlothian midfielder played a key role in Ghana’s qualification to its first World Cup in 2006. Unfortunately, he was not included in the squad because he would have missed the first two games in Germany due to suspension.