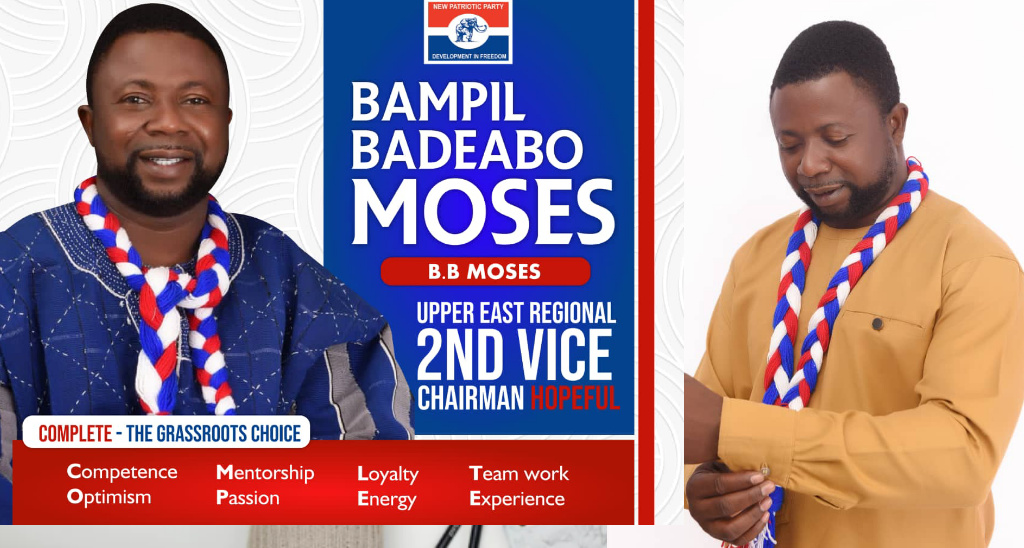 An aspiring Upper East Regional 2ND Vice Chairman of the New Patriotic Party, Hon. Bampil Badeabo Moses, affectionately referred to as B.B Moses, has called on the leadership of NPP and the government to prioritize a massive grassroots agenda of mobilizing all core core NPP members across the country. He said the morale of the rank and file of party at the base is very low and needs urgent attention and motivation to avoid apathy among party members. He has observed that the majority of the party’s young men and women at the grassroots feel neglected and sidelined by the party’s leadership as some of these young people have accused some government appointees of arrogance and selfishness. Hon. BB Moses noted that the NPP government, led by Nana Addo Dankwa Akufo-Addo, has done well by initiating many lofty pro-poor policies aimed at ameliorating the suffering of Ghanaians, however, the party has failed to communicate these policies effectively to get its members to appreciate. He added that many party people feel that instead of party authorities focusing on the grassroots, the leadership and some government appointees are rather deeply engaged in what they call political mafia games against one another to determine who is “in charge” or “powerful” and who should be reelected or be removed at what level. Hon. BB Moses has warned that if the government appointees and the party’s leadership do not consider the concerns of the party’s grassroots, all the lofty pro-poor policies of the government would fail to secure victory for the party in 2024. Hon. Moses believes that if all the government’s programs and policies fail to touch the hearts of the core party people and get them benefiting from these policies, it would be a challenge to get them sacrifice for the party in the next election in 2024, no matter who becomes a Presidential candidate. As he sees it now, the party seems to be embarking on an irredeemable suicide mission, if nothing is done to change the trend of happenings within the party and government.

The Upper East Regional 2nd Vice Chairman hopeful, who is a Tutor at the Gbewaa College of Education in Pusiga, has called on the government to stop springing SURPRISE policies on Ghanaians. He has asked sector Ministers and Ministries to ensure that every new policy is well explained, stakeholders properly engaged and thorough consultations made with adequate public sensitization before implementation. He is worried that such surprise new policies in the Education sector is likely to hurt the harmony of the sector and could court stakeholder resistance. He noted that stakeholder engagement is necessary for the successful implementation of any program, noting that teachers are key stakeholders in the education sector and must always be adequately engaged to ensure smooth implementation of new policies to ensure industrial harmony.

The versatile NPP’S grassroots politician, Hon BB Moses, is determined to persuade the grassroots with an aggressive conflict resolution agenda that would seek to engage more with the party’s base to ensure it secures victory in 2024 Presidential elections and win more Parliamentary seats in the Upper East Region. He has promised to ensure a well coordinated party internal conflict resolution strategy to address the multifold disagreements amongst party people at all levels of the party from the polling stations, electoral areas and at the Constituencies in the Upper East Region. Hon BB Moses has proposed an eight letter word strategy christened, the COMPLETE Leadership Strategy which he hopes would complement his colleagues at the Regional Executive Committee to achieve success for the party. This COMPLETE Leadership Strategy combines COMPETENCE, OPTIMISM, MENTORSHIP, PASSION, LOYALTY, ENERGY, TEAM WORK and EXPERIENCE which epitomizes the persona of Hon. B.B in the service of NPP in the Region. The COMPLETE grassroots based agenda has received massive support from the party’s rank and file, especially the youth in the region, who associates themselves with Hon BB Moses as an accountable, selfless, diligent, hard working and strategic party leader who listens to their concerns.

Hon B.B Moses is the Chief Patron of TESCON in the Gbewaa College and this makes him very popular among the TESCON members across the region. He has been very active with NPP politics for the past 20 years. Hon. Moses has held many political positions. He is the immediate past Presiding Member for the Garu District Assembly, he served as a former 2nd Vice Chairman of NPP in the Garu Constituency, he is a two term elected Assembly Member for the Denugu electoral area and is currently the Chairman of NPP Communication team in the Garu Constituency. Moses has a big bag of political experience that can help the NPP in the region.

Speaking to this reporter, the Regional 2nd Vice Chairman aspirant noted that any party strategy that does not touch the hearts of the party’s core members is bound to face problems. He has appealed to the party’s delegates in the region to give him the opportunity to contribute to the growth of the party in the region. COMPLETE Leadership, focus on the grassroots. God will do it.

KOBBYCHINA, ASHANTI’S BEST BET: THE RIGHT GIANT FOR THE JOB