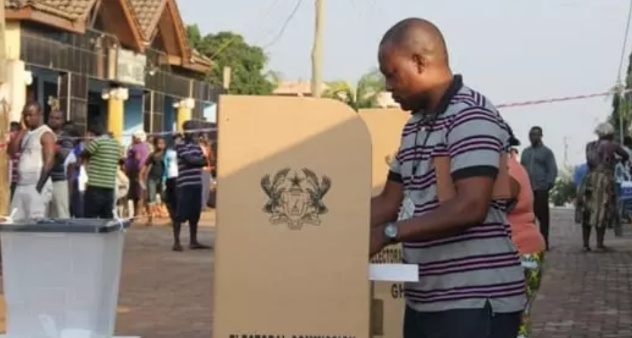 A picture of a man at the election centre

Mr Evans Nimako, the Director of Elections for the governing party, the New Patriotic Party (NPP), has said the main opposition National Democratic Congress (NDC) has no reason to stay away from events organized by the Electoral Committee (EC) to assess last year’s elections.
He said that the NDC’s claim that the elections were rigged is unfounded because they went to court on that assertion, but, however failed to substantiate their allegation.

The NDC boycotted the two-day event held by the EC to examine the 2020 elections.
The party further dismissed claims by the chairperson of the EC Jean Mensa that the 2020 election was the most successful in Ghana’s history which demands celebration.
According to the party, there are several examples to show the election was flawed and poorly organized.

At a press conference in Accra, Director of Elections of the NDC, Elvis Afriyie Ankrah said the death of at least six persons, vote padding, widespread irregularities and the unprecedented number of rejected ballots, point to a process that was contrived and poorly organized.
He has been urging the public to treat the EC’s comments with contempt.
The NDC has taken note of several false claims by the Chairperson of the Electoral Commission Mrs Jean Adukwei Mensa in a speech delivered at the just ended two day workshop between the EC and the Interparty Advisory Committee.

“The purpose of this press conference is to formally respond to and expose the many unfounded claims peddled by the EC chairperson in her speech and to explain to you the reasons for our boycott of these IPAC engagements.

Mr Nimako who attended the event on behalf of the NPP, told Dzifa that “When the CDD CODEO organized a similar review workshop to assess the conduct of the elections in Ada, the NDC were there.

“CODEO is one of the local CSOs that monitors the elections but it is not the constitutionally mandated body to conduct elections. I am saying that to take an entrenched position that the 2020 presidential and parliamentary elections were rigged is not the best.

“The NDC went to court, proceedings in court were telecast for the whole world to see. The star witness of the NDC was Mr Asiedu Nketia so where is this coming from? If you have any strong evidence to prove that the elections were rigged, you were before the judiciary to prove. What did we see?