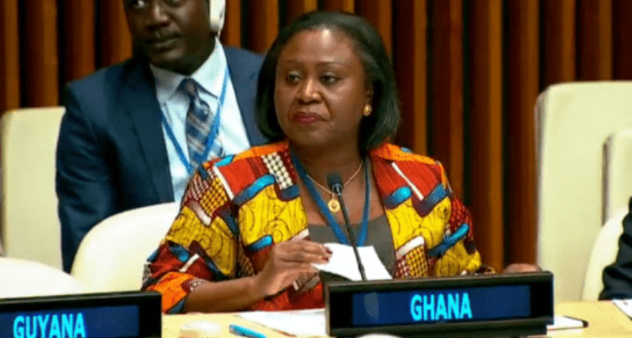 A picture of Martha Pobee

António Guterres, who is the United Nations Secretary-General, announced today the appointment of Ms. Martha Ama Akyaa Pobee of Ghana as Assistant Secretary-General for Africa in the Departments of Political and Peacebuilding Affairs and Peace Operations (DPPA-DPO).

Ms. Pobee succeeds Bintou Keita of Guinea, who took up a new assignment as the Secretary-General’s Special Representative in the Democratic Republic of the Congo and Head of the United Nations Organization Stabilization Mission in the Democratic Republic of the Congo (MONUSCO). The Secretary-General is deeply grateful for her service and contributions as the first Assistant Secretary-General for Africa in DPPA-DPO.
A career diplomat, Ms. Pobee brings more than 30 years of experience in international affairs and diplomacy with her Foreign Ministry. Currently Chief Director of the Ministry of Foreign Affairs and Regional Integration, she was previously Ambassador and Permanent Representative of Ghana to the United Nations from 2015 until 2020. In that position, she performed various special assignments, including as the Chair of the African Group of Ambassadors in New York, Vice-President of the 71st Session of the United Nations General Assembly, Chair of the New York Group of Friends of the African – Women Leaders Network, Co-Facilitator of the High-level meeting on Financing for Development 2019, and Co-Chair of the Group of Friends on Gender Parity at the United Nations, among others.

Ms. Pobee previously served as Deputy Head of Mission and Chargé d’affaires at the Ghana High Commission in Pretoria (2012 to 2015), Director of the Information and Public Affairs Bureau at the Ministry for Foreign Affairs (2010 to 2012) and Head of Chancery at the Ghanaian Embassy in Washington, D.C. (2006 to 2010). She was Acting Director of the Bureaux for Human Resources and Administration (2006) and for Information, Culture and Linguistics (2004 to 2006). Posted to the Ghanaian Embassy in Tel Aviv in 2000, she served as Minister-Counsellor and Deputy Head of Mission (2002 to 2004), and as Chargé d’affaires (2000 to 2002). Ms. Pobee also served as Acting Director of the Personnel and Training Bureau (1998 to 2000), having been posted to Ghana’s Permanent Mission to the Office of the United Nations in Geneva (1995 to 1998) and to the Embassy in Moscow, where she was First Secretary (1994 to 1995).
A graduate of the University of Ghana, Ms. Pobee also holds a master’s degree in Development Studies with a specialization in Women and Development from the Institute of Social Studies in the Hague. She also has diplomas in Public Administration and Multilateral Diplomacy from the Ghana Institute of Management and Public Administration and the Geneva Institute of International Studies.