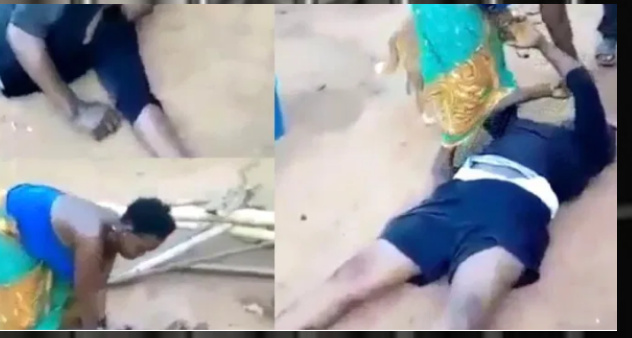 News reaching paulinaanaba.com is that a woman has been accused of witchcraft at Aportoyiwa in the Ahafo Region.

The accused is a 46 year old mother of five and a wife. Mariatu Iddrisu is her name and she lives at Mom Zongo. One of the suburbs of Goaso.

The husband narrated that for seven years now, the wife has been epileptic. They therefore visited the chief priestess and paid GH 200.00 to the priestess towards the healing process.

Idrisu narrated that the wife who had gone to see the priestess came home with bruises and a baldhead after being beaten by the priestess with a cutlass.

A picture of Mariatu being beaten

He claimed a white powder was given to the wife to sniff. She started manifesting strangely and was immediately accused of being a witch. The priestess threatened to cut the throat of the wife but was stopped by witnesses around the scene.

The husband claims the incident was taken up by the Goaso authorities and the police. However, the court keeps postponing the case every two weeks. For six months now, they feel they are being tossed up and down and nothing good will come out of it.

They are financially drained and can’t afford a lawyer.

Samuel Agbotse has given an assurance of providing legal services to the victim and her husband.  The family have also made it known the stigma and trauma they are going through is making life difficult for them in the community because of the allegations levelled against the wife.

Watch the video below