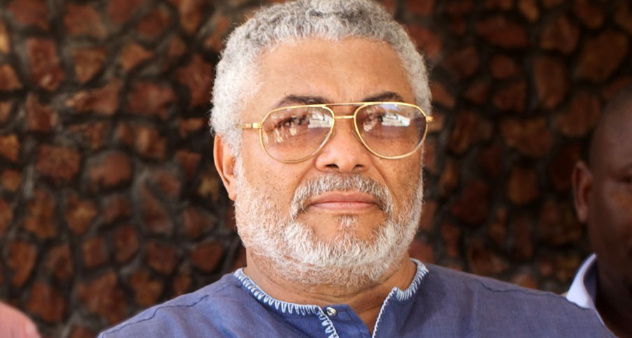 A picture of J. J. Rawlings

News reaching paulinaanaba.com is that former president, his Excellency J.J Rawlings has kicked the bucket.

He passed away today at Korlebu hospital after a short illness. He was admitted there for almost a week before his demise.

He leaves behind 4 children. Three girls and a boy.

It is worthy to note that his mum passed away recently and was given a befitting burial.

Indeed Ghana mourns. He was born on 22nd June 1947, to a Scottish father and a Ghanaian mother from Dzelukope.

He was therefore 73 years old when he passed away.

Schooled at Achimota, where he obtained ‘O’ Level in 1966. He enrolled as a flight Cadet and later selected to attend the Ghana Military Academy and Training School in Accra.

In January 1969, he won the coveted “Speed Bird Trophy” as the best cadet in flying and airmanship.

He earned the rank of Flight-Lieutenant in April 1978 and on 4th June, 1979, Flt.-Lt. Rawlings revolted and the Armed Forces Revolutionary Council (AFRC) came into being.

The AFRC,  tried to  restore a sense of moral responsibility and the principles of accountability and probity in public life.

The NDC (National Democratic Congress) was then formed. In 1992, he contested and won the 1992 Presidential and Parliamentary elections. In 1996 he won again.

He has to his name a 1993 World Hunger Prize, and an Honorary Doctor of Law Degree.

Related Topics:J.J. Rawlings
Up Next