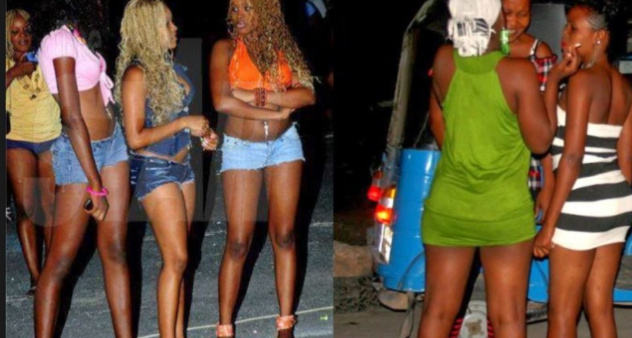 A picture of sex workers

33 sex workers, mostly foreigners, have been arrested by the Accra regional command during a dawn operation at Pokuase in Accra, Ghana.

Head of the Public Affairs Unit of the Command, Deputy Superintendent of Police (DSP) Effia Tenge told the Ghana News Agency that the five-hour operation took place at Pokuase Timber Market on May 20, 2021.

She said the operation was done in collaboration with the Ga North and West Immigration officers, NADMO personnel and task force from the Ga North Municipal Assembly, assisted by police personnel from the Amasaman Divisional Headquarters and Adjen Kotoku District.
The exercise was based on intelligence to arrest commercial sex workers and destroy their unauthorised habitats, which mostly accommodated drug dealers, robbers and minors used in sexual exploitation.
The operation also saw the demolishing of several unauthorised wooden structures inhabited by commercial sex workers mostly Nigerian nationals and a few Ghanaians.

DSP Tenge said the suspects would be screened and the foreigners handed to the Immigration Service for deportation, while the others would be investigated and put before the law courts if found culpable.