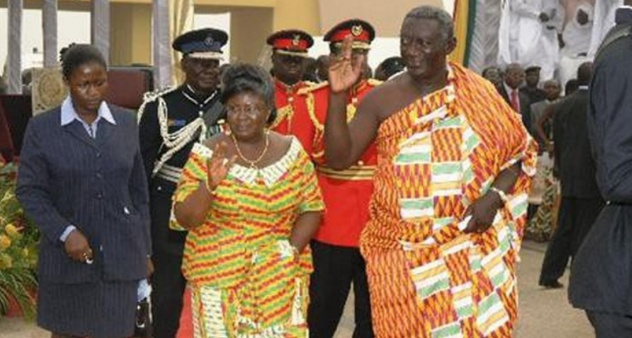 A picture of Kuffour and his wife

Former President John Agyekum Kufuor has opened up on events that led to his marrying Theresa Aba Kufuor. According to him, he married at age 23 after they met at a Republic Day Anniversary Dance in 1961 in London.

He explained he had completed his law course the same year Madam Theresa finished her nursing programme in Scotland.
“We got talking at the dance and became friends who got married in 1962 and gave birth to our first child in 1963, the second in 1964.
The third came in 1965 but we took a break and the 4th came in 1968, then the 5th when I was in detention after I became a Deputy Minister,” he recounted on Adom TV’s M’ahy3ase3 with Afia Amankwa Tamakoloe.

As a couple who have been together for 58 years, the former President noted that Madam Theresa has been the pivot of their union and family.
The Gentle Giant, as he is popularly known, lauded his wife for being supportive all these years and taking care of their children.
Due to the politics, I was mostly away but I must say she did a good job and has sustained the marriage to this point. It has not been all smooth but she is a good person who easily lets go even when you offend her,” he touted.

Mr Kufuor, who revealed they will be celebrating their 59th marriage anniversary in September 2021, also expressed appreciation to God for how far they have come.