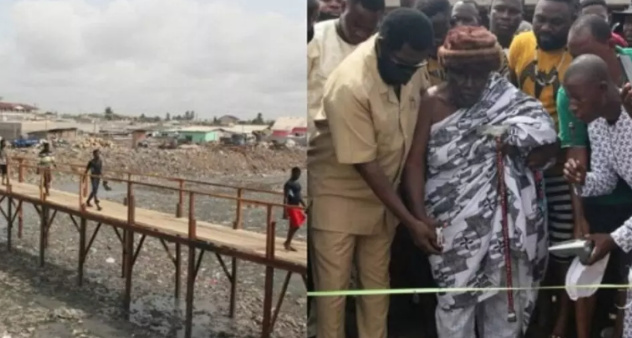 A picture of the bridge

The Member of Parliament for Ablekuma South Constituency, Alfred Oko Vanderpuije, has strongly defended his decision to support the construction of a wooden bridge for the people of Chorkor and Shiabu in his constituency.
The former Accra mayor, in an interview, said his constituents are happy and would reward him in the 2024 elections with this support.

Mr Oko Vanderpuije came under heavy criticism from some members of the public for his decision to construct and subsequently attend a ceremony to commission the wooden bridge that spreads across the Chemu lagoon.
For his critics, his constituents deserved better than a wooden bridge but in a sharp response, the two-time Member of Parliament for the Ablekuma South Constituency said he only resolved to support the construction of the wooden bridge after several attempts to get the Coastal Development Authority (CoDA) to construct a concrete bridge for residents in the area failed.
For him, the residents in these two areas are happy for his support and would reward him positively in the 2024 elections.