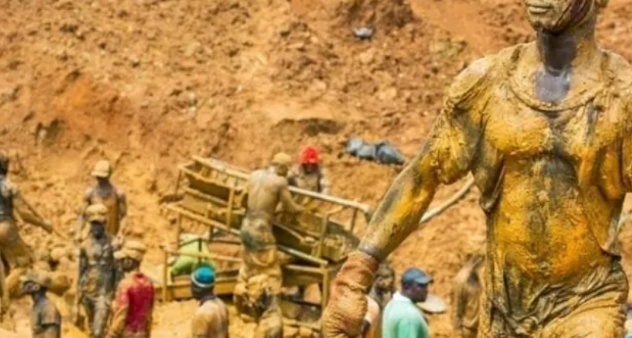 A picture of a mining site

Former Member of Parliament for Ablekuma Central Constituency in the Greater Accra Region, Ebenezer Nartey has called on the government to ban gold export in order to be able to fight illegal mining effectively.
Mr. Nartey said banning the exportation of the commodity will compel people to halt gold mining, which will also help in the fight against the canker.

The former New Patriotic Party (NPP) MP commented on the government’s renewed fight against illegal mining, which was described unsuccessful in the first attempt.

He explained that “if we don’t fight it with political will, we will suffer. Those of us in the cities can get a few Cedis to buy water, but how about those living in rural areas who depend on streams, rivers and other water bodies?”

Mr. Nartey said banning the exportation of the commodity will compel people to halt gold mining, which will also help in the fight against the canker.

The former legislator said, “We should ban exportation of gold for some time and use that period to work on our water bodies and also come out with policies to mine gold without destroying the environment”.

He further indicated that “I am against the burning of excavators because some assemblies do not have such equipment so we could have given it to them”.

Mr. Nartey accused six bodies of also directly or indirectly being part of the illegal mining activities in the country.

“I always say there are six groups that indulge in galamsey and they are politicians. Chiefs are doing this because people go to them to plead on their behalf when they are arrested and by pleading on their behalf, they are encouraging people to do it.
The security agencies are also doing it. The religious leaders are doing galamsey in the sense that those who are involved when arrested, call their religious leaders to plead for them. They don’t go there directly to do illegal mining but their actions are contributing to it.

“Journalist are also part…when one is arrested, they fall on journalists to put out sensational stories about the arrest for a few monies so it is difficult for the journalist to expose the one in it.”

The former MP for Buem, Daniel Kwesi Ashiamah, added that “I am in support of the fight by the government but I am against the burning of the excavators. We should have a different way of seizing the machines and use them for the benefit of the state”.
They say the control boards are removed but the security can monitor them till the one with the control board would come.”
Mr. Ashiamah noted that “we should use good ways to get the excavator…we can use them in the assemblies and come up with how we can mine the gold but we will not destroy the environment”.

“It’s not about whether we should burn the excavators because we have the gold. Let us come out with a policy framework that would ensure that crops, water bodies and other natural resources would not be destroyed”.

He said “Nana Addo failed in the first term of stopping galamsey so the next step is to come out with the policy frame”.

Ben Ephson lectures on how to mitigate risks in investigative journalism