Jamie Foxx is mourning his younger sister Dixon who passed away. A statement was released on Oct. 19 as the day of her demise. She was 36.

He wrote that, his heart is shattered because his beautiful sister has transitioned. To him, she was a bright light and will always be alive. 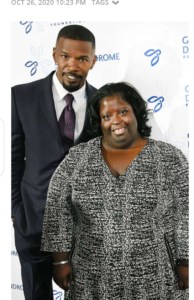 He claimed that during parties she stole the show anytime she got on the dance floor. He prayed she is well and in heaven now dancing with her wings on.

In 2011, Dixon was named a Global Ambassador for the Global Down Syndrome Foundation in 2011. She took part in Special Olympics for nearly a decade and had aspirations of becoming a professional dancer.

In one of the instances, she wrote that her brother has given her a chance to do some special things. She wrote that she had danced in his video ‘Blame, at some of his concerts all over the country, and at the Grammys!.

Jamie says he is so heartbroken but looked back on those cherished smiles and memories that she left him to keep him warm.

He eulogised her that , she had left a hole in his heart. However, he will fill the hole in his heart with fond memories. She was indeed to many a “beacon of hope, a true leader and role model whose objective was to always help others.”Everyone at the Global Down Syndrome Foundation is unhappy and is  filled with grief. The tribute read.

Related Topics:DixxonJamie Foxx
Up Next