Aboboyaa Rider Graduates From UCC In Law of Taxation 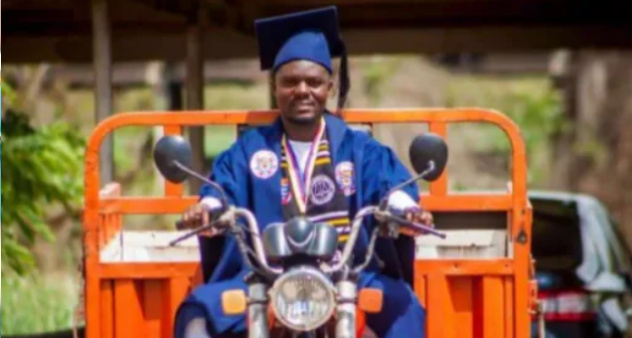 A picture of Kofi Adjei Fosu
Kofi Adjei Fosu graduates from UCC as the best graduating student of Law of Taxation from the Faculty of  the Law. He achieved this feat having to sell sachet water in a tricycle before and after lectures to support his expenses for three consecutive years.

With his first degree from KNUST, he applied and gained admission into the Faculty of Law at UCC.  He was one of sixty-three successful applicants in 2017.

Fosu said he wanted to be a lawyer because he wants to impact upon the lives of the vulnerable in the society. And he prays that his story will inspire anybody going through struggles to stay focused.

He added that with determination, perseverance and consistent hard work, nothing in this world is impossible!

Fosu said it all began when he gained admission to UCC Law School. He had to borrow money to pay his school fees which was GH₵8,549.00.

Looking at how he was supposed to cater for the loan and pay his fees for the subsequent years, he decided to resort to the use of tricycle which he had also borrowed money to buy, to use in selling sachet water to students on campus.

He said his program required rigorous studies and he had to combine studies with the selling of water. This came with a huge challenge because he had to balance the limited time for studies with selling water by doing door to door delivery.

According to Fosu, he experienced persistent back pains, waist pains and pains in his knees because of carrying water and climbing 100s of staircases each day.

He said he had only 5 to 6 hours to sleep with the remaining 19 hours spent between selling water, attending lectures and engaging in other academic activities like doing assignment and going for group studies. This continued from first year through to final year on campus and even during  Ghana Law School entrance exams preparation period.

He said he always preferred to serve and he has a greater desire to sacrifice short term comfort for a worthy cause. This made him to resort to riding his tricycle from Takoradi with his luggage and books to Cape Coast consistently each semester.

He said he sold water at a retail price of GH₵3.00 instead of GH₵3.50 upon climbing of 100s of staircases to deliver at door steps.

He recounted how he had to wake up at 1:00 AM in the morning as a result of water shortage in the Cape Coast municipality and at times operational challenges at the factory. He sold water from 5:00 am to 7:00 am and in the evening from 6:00 pm sleeping as late as 10:00pm.

He said he aspires to pursue a masters and Doctorate degree in both Law and economic policy. 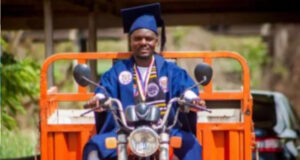 A picture of Kofi Adjei Fosu

Fosu believes that his life experiences can help him draw better policies that will have a positive effect, and impact upon the lives of the ordinary Ghanaians who fall within the income brackets of our economy.

Fosu is grateful to God for graduating as the best student in the Law of Taxation.  He is also happy for excelling in prestigious Ghana School of Law.

The Best College Of Education To Attend In Ghana