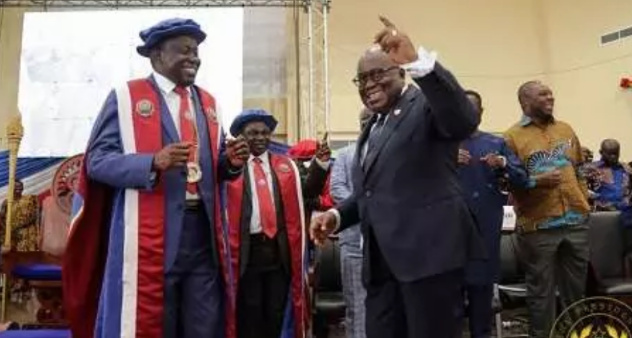 A picture of Akuffo Addo

The Council of the University of Cape Coast (UCC) has decided to confer on President Nana Addo Dankwa Akufo-Addo an honorary degree.
A Special Congregation will be held on Saturday, May 29 during which the degree of Doctor of Philosophy in Educational Leadership (Honoris Causa) will be conferred on the president.

This was communicated to the Presidency in a letter dated Friday, April 30, 2021.
On Monday, May 17, the Presidency wrote back to UCC through the Minister of Education announcing acceptance of the decision.
Early education

President Akufo-Addo started his primary education at the Government Boys School, Adabraka, and later went to Kinbu, in Accra Central.

He went to England to study for his O-Level and A-Level examinations at Lancing College, Sussex, where he was nicknamed ‘Billy’ and joined the Anglican faith.
He began the Philosophy, Politics and Economics course at New College, Oxford in 1962, but left soon afterwards.
He returned to Ghana in 1962 to teach at the Accra Academy, before going to read Economics at the University of Ghana, Legon, in 1964, earning a BSc (Econ) degree in 1967.

He subsequently joined Inner Temple and trained as a lawyer under the apprenticeship system known as the Inns of Court, where no formal law degree was required.